South Africa faces a new variant of Covid amidst a second wave. Speculation surrounds the wave’s momentum which is feared to be greater than our first. Numbers are increasing, hospitals are saturated and oxygen is a sort-after yet life-saving resource. Patients with Covid pulmonary disease and cardiac complications require oxygen, and more often than not – lots of it.

This calls for an urgent need for rational and cost-effective oxygen usage.

One would then ask what has contributed to the increased usage. This is multifactorial and obvious. But perhaps not so.

The disease entity itself: Covid pulmonary disease requires a high fraction of inspired oxygen to oxygenate the patient’s blood to an appropriate level.

This is compounded by the length of hospital stay. If the average patient requires 5 days of oxygen therapy, the demand will grow by 30 people per day. On the 5th day, the hospital will have a running constant of 150 patients on oxygen therapy. This scenario is ideal provided that there are no variables. Yet reality will always be variable in incidence, length of stay, mortality and levels of oxygen therapy.

Levels of oxygen therapy can be divided into two groups. That being low flow and high flow oxygen devices. The differentiation between the two: the oxygen flow rate in relation to the patient’s Peak Inspiratory Flow and Inspiratory Minute Ventilation. By definition, a low flow device does not meet the entire requirement of the patient’s inspiratory demand. Thus room air will be entrained to make up for the volume unaccounted for by the device. The resulting consequence will be dilution of the oxygen percentage. Yet a high flow device will meet the entire inspiratory demand. Hence no additional room air will be entrained [1].

With this in mind, is the simple deduction correct that a low flow device is more efficient than a high flow device in terms of oxygen use? I leave you with this question, a graph and principles that need to be considered: enough oxygen to maintain an appropriate blood-oxygen level, work of breathing and the amount of oxygen wasted.

Until next time, take care. 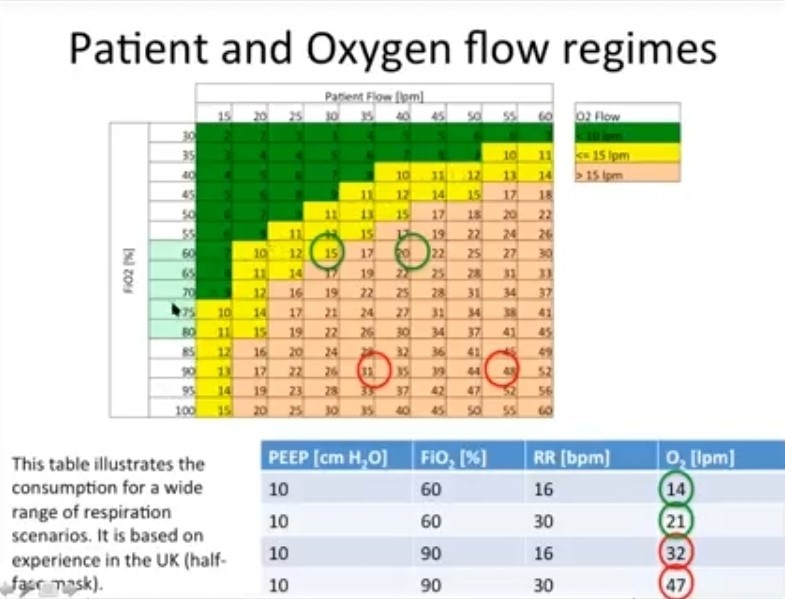